It will be nearly 2 years since The Smooth Jazz Cruise has sailed, way too long for sure. We cannot wait to see our amazing guests, musicians, staff and crew again. We know that everyone is ready to sail and we are more than ready to have you join us. This sailing is the first of our three sailings of The Smooth Jazz Cruise in ’22 so we have loaded up the lineup with more Artists than ever before. Join us for this amazing cruise program.

This is sure to be a sell out so book your stateroom now by clicking the LEARN MORE buttons below. 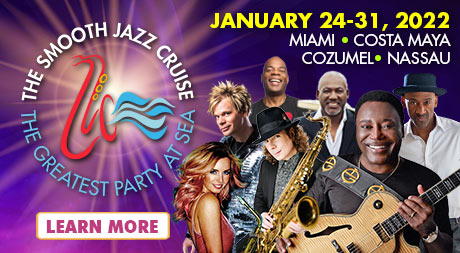 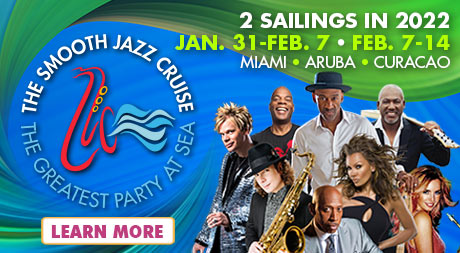 I call my music Jungle Jazz because it's a mixture of African, Latin and Caribbean grooves complimented by my American jazz roots swingin' hard, with my worldly funky upbringing accenting each song. This project will let you know I love to beat on things and create a communication within my music you can feel. MORNING SUN opens with a smooth beginning of the day taking you through a Desert Crossing to groovin' on a Wednesday Morning while you are Pushing Forward, with the energy of Salsa landing you in the Peaceful Streams of life. It's a Grooveness... a Malian Flight into the blue skies bringing you into your spiritual consciousness in the powerful time of 4AM landing you in the Rain Forest of possibilities. My heart pumps through each and every tune featuring many of my good friends who happen to be great versatile musicians. Winning 4 Grammys with Keb Mo and Dianne Reeves, Gold and Platinum records with Stevie, Sting and Kenny Loggins, spending my young years playing and touring with Miles and many other great artists and accumulating over 1,200 instruments has added to my musical influences and only makes me desire more strongly to share my music with the world. I hope you love and enjoy my musical project, and feel my Jungle Jazz as I help you bring up your MORNING SUN.

He’s played on albums ranging from Miles Davis to Marcus Miller. Here on his own, Munyungo Jackson plays a surfeit of percussion instruments from all over the world on this panoramic collection of upbeat and life affirming tunes. The ensembles range from solo treatises by Munyngo as he  plays balafon, talking drum, shells, voice and voice on the Caribbean title track to nine member ensembles which include tenor sax titan Kamasi Washington and passionate vocalist Dwight Trible on the ethereal “Desert Crossing.” Justo Almaro’s flute floats on “Salsa” while the leader’s timbales simmer like fried rice under Ebony Fay’s voice on a fervent read of “Afro Blue.” Keyboards by John Beasley thicken up the African heat of  “Rain Forest”  with West African heat provided on the soulful “Malian Flight.” A rich duet between Jackson’s kalimba and vocalist Harry Thompson make for a life affirming “Peaceful Streams,” with the loving dedication of the music and attitude to God. You can feel the thankfulness on every note. Take two every morning!

MUNYUNGO/Morning Sun: Was your biggest complaint about Andy Narell was that he was a touch too much Berkeley and not enough Oakland (you know what I mean)? If so, Munyungo is your man. Armed with an arsenal of percussion instruments and putting them active display, he even brings the stuff you'd think are toys to a fully realized life. Loaded with an organic, close to the ground vibe, the companies that sponsor him are putting their promotional budgets to good use. Open your ears to the jazz and beyond sprightfully presented here and enjoy some new possibilities and frontiers.

A longtime percussionist for Stevie Wonder, four-time Grammy winner Munyungo Jackson has played drums, congas, bongos, timbales, and numerous other instruments for an amazing list of other A-list musicians, including Miles Davis, Sting, Kenny Loggins, Keb Mo, Herbie Hancock, Dianne Reeves, the Zawinul Syndicate, Ronnie Laws, The Temptations, The Four Tops, and The Supremes. In fact, he now has some 1,200 instruments in his arsenal.

On this disc, the free-spirited California native offers a 15-song set that is a real genre-bender, offering anything from a euphoric, transcendental sound to hip hop and other types of more aggressive music. I found the title track, the first number on the album, to be an especially pleasing mix of salsa and mellow sounds, offering a beautiful musical landscape for listeners. To me, it is the most memorable piece on the disc, which in some respects tries to do too much.

I found myself yearning for more of the Morning Sun opening style. But it’s all good. Jackson calls his music “Jungle Jazz, because it’s a mixture of African, Latin, and Caribbean grooves complimented by my American jazz roots swingin’ hard, with my worldly funky upbringing accenting each song.” I’m not sure if ‘Jungle Jazz’ would be my term for describing what he does, but the African, Latin, and Caribbean grooves augmented by American jazz roots pretty much nails it.

You can’t go wrong with this West Coast percussion legend and his open, sometimes airy vision. It’s a solid disc, even if it meanders a bit more than I wished.